It has been 45 years since the sudden death of Elvis Aaron Presley, yet despite the passing years, his appeal and popularity has never waned. There is no doubting the impact of Elvis; widely considered to be the single most significant figure in the history of rock and roll, his influence changed the music industry forever.

People love Elvis Presley. The face, name and music of the man styled as the King of Rock n Roll is instantly recognisable. Everyone at the very least has heard of Elvis.
It is not just those who grew up listening to his music who are Presley devotees; today a whole new generation is discovering the power of his legacy for themselves, whether through a passion passed from parents or by delving into musical history.

In the world of Elvis super fandom, the rise of Elvis tribute acts has become a genre all its own. Annual contests for the most authentic Elvis lookalike and soundalike are fiercely competitive. Contestants are judged on everything from performance, looks, singing talent and showmanship. The chance to be crowned ‘The King’ is held in high esteem and taken very seriously. But it is not just the thrill of competition that makes Elvis impersonators so popular.
For Elvis entertainers, it is so much more than a guy singing in a jumpsuit. A tribute artist is something more: it is a privilege, a mark of respect, and a sense of pride that goes into crafting an Elvis tribute.

Seeing a Tribute band or Tribute act perform, is the ideal way to see a favourite performer at a fraction of big-ticket prices. Tribute acts also do not have to build a fan base (although they often do!) A top-quality Elvis act can attract a large audience, very quickly. His huge following already know his music and are eager to see ‘Elvis’ perform live. A good Elvis tribute act learns the music, not just the biggest hits, but all of them, properly. The looks, the voice, what to wear, how to move… for a tribute act, becoming Elvis is about the whole package.

More than ever, industries everywhere are looking for original and innovative entertainment options in order to increase reputation, boost morale and publicise the business. 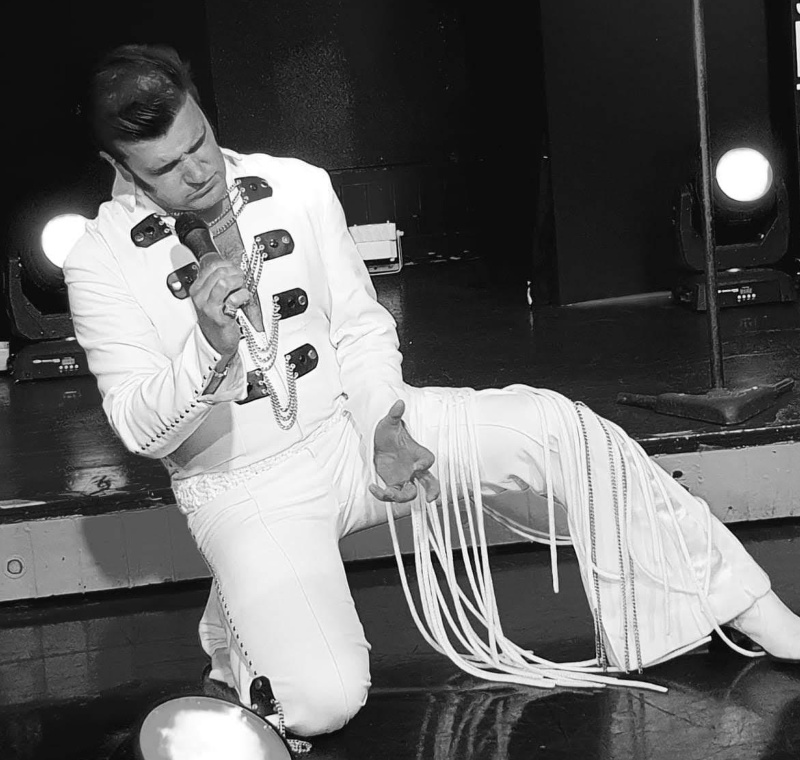 Exciting and electrifying are everyday terms when describing Elvis Presley’s live shows. His ability to whip his audience into a frenzy is renowned. His good looks, swivelling hips and incredible voice, all added to the charisma, which made him adored by millions.

Elvis tribute act, Lee proves he knows how to put on a show that is worthy. In a riveting performance, this Elvis Tribute Show is a captivating journey through the decades. It features the best of Elvis’s hits; from the 50s and 60s, the movie songs and the flamboyant 70s Vegas years.

This superb tribute act is no stranger to wowing big audiences.

This remarkable tribute to The King is a stylish, nostalgic addition to theme parties, corporate events, and weddings. 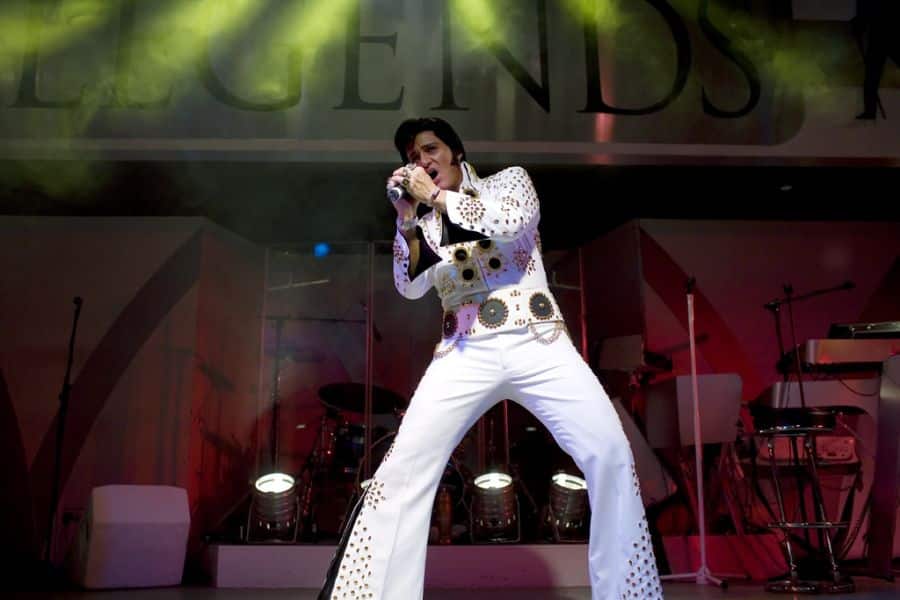 Las Vegas is the city famed for its link to Elvis Presley. The city became one of the most important locations in Elvis’s career and even today the stars effect on the Entertainment Capital of the World is astounding. Vegas has become a Mecca for fans and impersonators of Elvis Presley. People around the world flock to the resort city for its Elvis-centric vibe and entertainment.

During his time in Vegas, Elvis played a staggering 664 shows which included a gruelling two shows a day, two-week residency. The song, Viva Las Vegas, released in 1964 and from the movie of the same name, is still one of Presley’s most prized hit songs.

For Elvis impersonator Clayton, like Elvis, Las Vegas holds a special place. American born Clayton hails from New York, before moving to Vegas with his family.

Music-loving Clayton fell in love with the trumpet, after meeting the great Louis Armstrong and began performing as a musician in hotels along the famous strip. After discovering his gift for impersonations, he honed his talents by impersonating singers such as Johnny Mathis, Neil Diamond and of course, Mr Elvis Presley. This was the beginning of Claytons astonishing Elvis Presley tribute act.

Clayton is stunning in his portrayal of the rock and roll legend. His look and sound are so authentic that he has also been featured in two LA movies as Elvis.

Vocally there was not much that Elvis could not do. His seductive voice and a blend of gospel, blues, and country music created a whole new subculture of music that shook the world.
Elvis tribute act, John is a new, young and fresh ‘ETA’ who has quickly achieved success for his stunning vocal ability and his uncanny resemblance.

This tribute show has ALL the hits, including Jailhouse Rock, Burning Love, Wooden Heart, Devil in Disguise, Hound Dog and much much more. John’s tribute to Elvis has all the charisma and reverence that Elvis is famous for. A must-see tribute to a rock & roll icon.

International Elvis tribute act, Mark, dubbed “The Closest to Elvis,” thrills in his mesmerizing tribute to the megastar. Mark is an uncanny lookalike soundalike of Elvis and has toured the world performing his Elvis show, appearing at venues from London’s West End to Memphis Tennessee. The enormous success of his show has attracted attention from those who knew Elvis best. He is privileged to have collaborated with members of the Presley family, close friends, original band members and has even been lucky enough to have met Priscilla Presley!

This spectacular interactive Elvis show is exciting and fresh. Full of energy, Mark’s star tribute is something special! Featuring the hit songs, the costumes and those snake hips, three-time National Tribute Award winner, Darren as Elvis will excite and delight every audience. Irresistible!

Steve is an Elvis Presley impersonator who has performed his sensational tribute to ‘The King,’ across the UK, Europe, and the USA. As a devoted fan, Steve portrays his hero with warmth and reverence. This Elvis tribute act has achieved wide recognition and success, starring in acclaimed productions of, Rocking on Heaven’s Door, Elvis in Concert, Elvis on Tour, Made in Britain, and Winter Dance Party.

Just like his hero, Steve knows how to bring rock and roll to a TV show! He has taken his Elvis tribute to TV, with performances on the World’s Greatest Elvis (BBC One), Stars in their Eyes-Elvis Special (ITV), and Graham Norton’s New Year’s Eve Special (BBC One)

Steve brings the Elvis factor, whatever the event type or size and is available as a breath-taking self-contained show complete with live guitar. For larger venues, ‘Elvis’ delivers the full dazzling concert experience! With full band/brass section and up to eight female vocalists, this is the ultimate Elvis show, to entertain at corporate functions, private parties, themed events and much more!

Book Your Very Own Presley Prince

There may only be one King of Rock n Roll, but these Presley Princes, more than fill those Blue Suede Shoes!